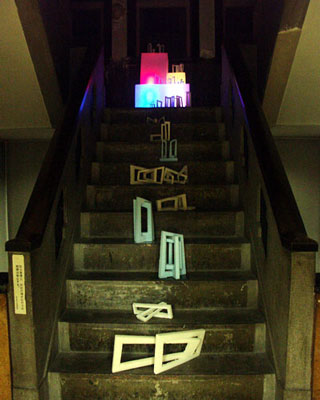 The meeting of art and architecture in Iwate

The concept of architectural heritage is still new to Japan, but sometimes a building holds so much history for local citizens that they refuse to let it be forgotten.

Local architects who valued the it for its record of the transition from modern to contemporary design voluntarily surveyed it and proved that it was actually still safe for public use. Together with the Kokaido Kenmin Forum, a citizens' group dedicated to preserving the hall, they successfully persuaded the government to designate it as a piece of historical architecture.

An extensive program of live music, dance and video performances also helped to attract over 4,600 visitors, many of whom confessed to never having been interested in contemporary art before. One 80-year-old attendee said, "Contemporary art is usually difficult to understand, but when I saw the dancing and heard the music I realized it was just like that -- a lot of fun making something new from the history of all that has gone before."