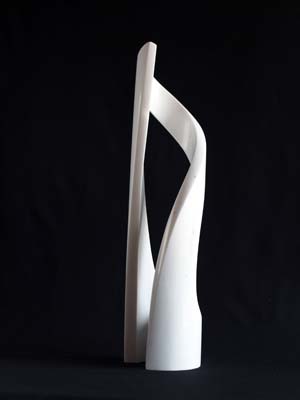 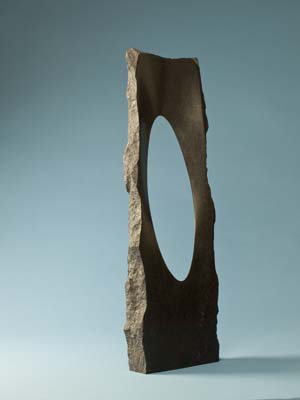 This is the first London exhibition of perhaps the most remarkable sculptural duo of the present time, the more remarkable in that both of them are that rare thing, carvers of sculpture in stone. If one encounters the works of Thomson and Katagiri together, as they have often wished to present it, one may be immediately impressed by how perfectly complementary they are. But it would do less than justice to these contemporary masters of sculpture if we did not first consider them as individuals. Individuals from opposite ends of the world, brought together by happy chance during their own pursuit of professional development. Hironori Katagiri, whose home was in Northern Japan, came to Scotland in the mid-1980s, to work at the Scottish Sculpture Workshop in Aberdeenshire. Kate Thomson, who grew up in Edinburgh, was at that time actively involved in promoting sculpture through workshops and public commissions. Their interests and career paths intersected at many points. Thomson and Katagiri were married in 1991, and made their home in Japan. Thomson did not exhibit in Britain again until 2009, though Katagiri did so twice in 2001.

Japan, however, presented rich opportunities for the Scottish sculptor; she won as many as fifteen commissions in her first decade alone, as well as contributing to numerous exhibitions. Thomson and Katagiri also have a remarkable record of activity as animators, organisers and advisers in promoting the practice and display of sculpture, first in Scotland and then in Japan, where Thomson was soon integrated into the Japanese art world. Later, she also proved herself an able art critic as contributor to the English-language press in Japan. Their reputation in Japan was their passport to participation internationally. In 2007 they left Japan for Scotland. The move does not at all imply withdrawal to a less ambitious programme, witness two public commissions that each of the pair is currently committed to, back in Japan. Nevertheless for the time being they share a small workshop in Edinburgh, a far cry from the spaces available to them in Japan, making large works impossible at present.

Thomson and Katagiri's return to Britain has been marked by exhibitions in Scotland in 2009 and 2010 in which they have shown together. It may surprise the London art public that this is their first opportunity to see artists of such global reputation. Their exhibition in 2010 at the Scottish Gallery in Edinburgh showcased their smaller work; two related exhibitions in 2009, in open settings against an architectural background, hinted at the scale and reach that commissions for public sculpture in Japan could provide for, indeed call for. These exhibitions at Mellerstain, the Adam house in the Borders, and subsequently at C R Mackintosh's Hill House near Glasgow, were presented under the title of Lyrical Abstraction.

So this was the title under which this brilliant couple, who are rightly insistent on their individuality, were prepared to sail together. By adopting the term as descriptive of their work, they were placing themselves in the most classic aspect of modern sculpture. Each, of course, was coming to that point from different directions, according to their respective Japanese and European traditions. Thomson, whose art education was in Britain, is willing to acknowledge the place of Brancusi and the Japanese-American Isamu Noguchi in her private pantheon. For Katagiri the formative influences were naturally different. Japan has a long tradition of using stone as an element of garden design. But stone sculpture as a modern 'fine art' was a post-war development there, perhaps starting in the 1960s but enjoying an exceptional burst of activity in the 1980s. That was the time when the practice of holding sculpture 'symposia' became widespread.

The extent and scope of the 'symposia' movement (for want of a better name) is little known in Britain, despite the growth of sculpture parks and collective workshops here. It originated in Austria as early as 1959, and is still active there, but enjoyed its most luxuriant growth in Japan, to a much lesser extent in Europe and in the USA. Both our sculptors have been deeply engaged with it. Even before she went to live in Japan, Thomson had organised a project of similar if smaller kind for the Glasgow Sculpture Studios, of which she was a founding Director. Katagiri's involvement began in the 1970s and later he was invited to take part in the symposium at Lindabrunn in Austria, of which he became Assistant Director. The Symposion Lindabrunn still continues and Katagiri is still heavily involved in it.

The term 'Lyrical Abstraction' was first used to describe the work of certain European painters in the 1960s. They rejected the geometric, constructed type of abstract painting being shown in their different ways by Ben Nicholson or Victor Vasarely, while having no wish to return to representation. They wanted their abstract forms to be expressive, even emotional, and immediately responsive to every movement of the hand and brush. This was much more difficult to realise in sculpture, where the artist's actions do not yield such instant results. But the principle is the same: the forms obtained should be expressive, be related to the organic, to the human body, mind and feelings, rather than to architecture or mechanics; poetic rather than prosaic. The word 'lyrical' implies, to modern ears at least, a desire for beauty of expression. Abstract sculpture of this temper has been surprisingly rare in the West since Brancusi.

There was not a tradition of Modernism in Japan as we understand it in the West, between the Wars or, not surprisingly, for long after. Art Schools were conducted on different lines and Modernism did not figure as something to be either promoted or opposed. The training Katagiri received was strong on manual skill, but not on ideology. So much the better, some would say. But on a fundamental level, whether in Japan or in Britain, to embark on a career as a sculptor involves choices about expression, about feeling. It seems to this writer that Katagiri's orientation as an artist was similar to Thomson's at an early stage, even before they met. In the 1980s when he had reached maturity, and had graduated from his university art course, a remarkable resurgence of working in stone had begun. It centred on the series of gatherings - symposia or concours - already mentioned. On the evidence available, these events in Japan seem to have resulted in a huge number of works in stone, many of massive size. This was the context in which Katagiri established himself and in which Thomson also participated after 1989. It was not a context that encouraged delicacy of expression, but both of our sculptors achieved it with optical grace, precision and economy, among many bombastic and extravagant creations around them. They did so in the different ways their own individuality dictated - Katagiri the more rugged, closer if you like to the nature of quarried stone, Thomson intent on taming the stone to serve her purposes of delicate construction and complex optical sensation, which sometimes strain the natural propensities of the material to the limit.

In this exhibition the sculptors show the relatively small-scale works (portable, anyway!) which have had to predominate since they have been in Scotland. On this scale, the difference between them is in a way less, but the complementarity more obvious. The temptation to see these works as male and female is irresistible, especially as Katagiri likes to work in basalt or black granite, Thomson in Carrara marble or onyx. Katagiri is the more sensuous, his expression sharper, Thomson more measured and contained, constrained even, by her carefully calculated spatial conceptions. Space is highly important to her, since she sees it, as she says, as a 'theatre set for life'. We may hazard that for Katagiri, mass is even more important.

The modest scale of their current work should not obscure their past achievements. Hopefully evidence of their work in Japan will be available to visitors to this exhibition. This will show the origins of both of them in the context so briefly described here, and will remind us that Kate Thomson yields nothing to her husband in boldness, a remarkable thing in the very different cultural climate of his country.

So where do Thomson and Katagiri stand in the context of British art now? Happily for them their two decades in Japan removed them from the fashion-conscious changeability of the London art world during that period. While neither of them is opposed to using devices outside their material, like artificial light and sound, these have never been used for fashionable effect. Their essence is in their material, as essential to them as it ever was to Moore or Hepworth. Some might see this as reversionary, if not reactionary. But after this long period while they were away from the Western art circus, we would do much better to see their work as Post-Modernist, in which they are under no historic necessity to take notice of the recent Western past. For us the work comes without ideological or stylistic baggage, as a salutary reminder of fundamental qualities of sculpture. Nothing can be more cool than that.